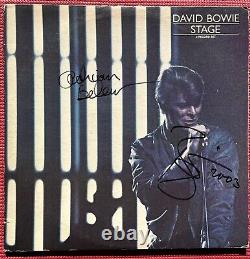 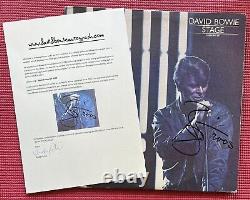 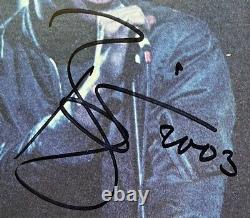 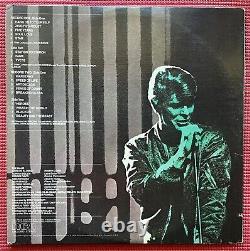 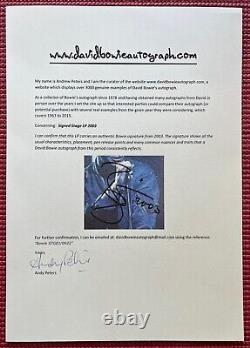 David Bowie & Adrian Belew. David Bowie and Adrian Belew signed "STAGE" double vinyl record album. This album was recorded LIVE in 1978 and was put together from the Isolar II tour, of which Adrian Belew (of King Crimson and Frank Zappa fame) was the lead guitarist. The album is signed by David Bowie in black sharpie and adds 2003. Adrian Belew also signs in black.

This is a big, heavy piece. I have attached scans of the front, back and of the open gatefold. This album was signed by David Bowie on November 20, 2003 at the Malmaison Hotel, Birmingham UK. Adrian Belew signed on July 18, 2022 at the City Winery, Chicago Il.

This album has a deletion groove on the bottom left corner and the gatefold has separated at the top (see listing image) but not visible from the front. The dual vinyls are clean and shiny and appear to be unplayed. Album is true to the scans. Full Letter of Authenticity by Bowie expert Andy Peters at davidbowieautographs for the Bowie autograph. The Adrian Belew was obtained in person and a video of the exact album being signed is available upon request.

Returning items has started becoming a bad trend on e-bay and makes it difficult to manage accounts and pay bills. Sorry and thanks for understanding! This item is in the category "Entertainment Memorabilia\Autographs-Original\Music\Rock & Pop\Records".