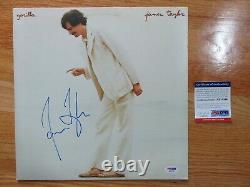 JAMES TAYLOR signed GORILLA 1975. Signed on the Front cover in Blue Sharpie by.

Released in 1975, it was more successful than Walking Man, his previous release, with two hits: "Mexico" and "How Sweet It Is (To Be Loved By You)", which rose to the top five on the Billboard charts. This would be his second-to-last release of new material for Warner Bros. Records, his last being In the Pocket. In many ways, Gorilla showcased Taylor's electric, lighter side that became evident on Walking Man. The song "Sarah Maria" is about his daughter Sally (born Sarah Maria Taylor on January 7, 1974). His then wife Carly Simon was featured on "How Sweet It Is (To Be Loved By You)" originally recorded by Marvin Gaye. Jimmy Buffett covered "Mexico" on his 1995 album Barometer Soup and performed "Lighthouse" during his Salty Piece of Land tour of 2005. All songs by James Taylor unless otherwise noted.

Obtained in person at Various Tours and Events in New England and New York City over the last 15 years. A ll Autographs obtained in person through Show Signings, Before at Sporting Event, Golf Tournaments and Special Dinner & Charity Events.